In 1989, the International Olympic Committee added cannabinoids to their prohibited substances list. This was the beginning of banning compounds from cannabis in professional sports, focused on testing for and prohibiting the psychoactive cannabinoid THC (Campos 2003). Although cannabis is considered ergolytic, a substance that actually impairs athletic performance, the reasons it was banned have to do with possible negative impacts on an athlete’s health as well as its illegal status in most countries. In 2004, the World Anti-Doping Agency (WADA) took responsibility for maintaining the list of prohibited substances in International sports, with THC and all related compounds (cannabinoids) (Huestis 2011). Agencies such as the United States Anti-Doping Agency (USADA) as well as similar agencies in other countries set anti-doping policies at the country level, looking to the WADA for guidance and adopting their policies. Enforcement of these policies, however, is left for individual sports associations.

In recent years, distinctions between cannabinoids, namely CBD and THC, have been made increasingly clear. CBD does not have the psychoactive effects that THC does, which is the main reason for the cannabinoid ban in the first place. However, the WADA policy did not make this distinction when cannabinoids were first banned, creating a lot of confusion as to if CBD was prohibited along with THC.

In 2018, the WADA updated and clarified their policy on cannabinoids, making a clear distinction that CBD is no longer a prohibited substance. In order to clarify their stance on cannabinoids, an informational page on WADA’s website defines cannabinoids and provides an answer as to why CBD is no longer prohibited. They explain, “Cannabidiol is not a cannabimimetic and has no psychoactive activity. Synthetic cannabidiol will not have THC but cannabidiol extracted from cannabis plants may also contain varying concentrations of THC, which remains a prohibited substance”.

The disclaimer about how CBD extracted from cannabis plants may contain THC is important because it sets the precedent for the majority of sports associations policy on CBD. The USADA has adopted this stance, stating on their website that cannabidiol is not prohibited, however, it is difficult to obtain a CBD extract without any THC, and therefore “the use of any CBD product is at the athletes own risk.” CBD products are legally allowed to contain 0.3% THC by weight, meaning it is very possible to consume CBD products and test positive for THC or even feel its psychoactive effects if enough is consumed.

Although the WADA and USADA have updated their CBD policies, it does not necessarily mean that athletes everywhere are free and clear to use CBD. Some sports organizations such as the Fédération Internationale de Football Association (FIFA) follow the WADA policies, and therefore their athletes are in the clear when it comes to CBD. However, some organizations in the United States set their own policies and regulations beyond the WADA. For example, the National Football League (NFL) has not made any statements in agreement with the WADA, and maintains strict policies on cannabinoids. Professional athletes are often discouraged from using CBD products due to the risk of them containing THC.

CBD is becoming increasingly popular in the United States, and with the recent changes to its prohibition status in sports, athletes are beginning to speak out about their use of CBD as well as invest in the industry. Many also see it as a stepping stone to removing other cannabinoids such as THC from prohibited substance lists, although since THC is still listed as a Schedule 1 Drug by the Federal Government, it remains prohibited.

In recent news, professional golfer and two-time Masters champion Bubba Watson was very vocal about his use of CBD in a CNN interview. The Professional Golfers’ Association issued a similar warning to that of the WADA and USADA warnings about uncertainty of CBD products containing the prohibited THC. However, Watson stated that he has done his research in finding CBD manufacturers that have reliable products which do not contain any THC.

Paul Pierce, a former Boston Celtics player, announced the launch of his CBD vape company on Twitter in October of 2018. 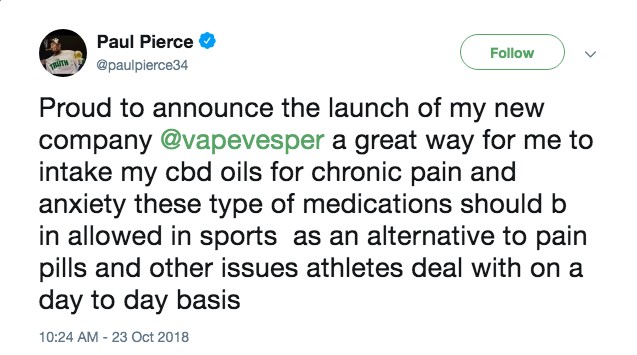 The claim that CBD is his alternative to opioid pain medications is similar to what many athletes are claiming to use CBD for. It is well known that athletes, especially those in high impact sports such as football or basketball are prescribed opioid pain medications at very high rates, with many of them becoming dependent on them, contributing to the opioid epidemic (Dunne 2018). Some athletes are arguing that CBD, as well as marijuana, should be allowed as a safer alternative to opioids.

In June of 2018, the BIG 3 professional basketball league became the first professional sports organization to publicly state that their players may use CBD as an alternative medicine (Forbes 2018). Although organizations such as the National Basketball Association (NBA) and NFL do not test for CBD, they have strict prohibition of THC and synthetic cannabinoids. These organizations have not made any statements in support of CBD use by their athletes.

While organizations such as the NBA and NFL have very strict enforcement of their cannabis policies, including cannabinoids on their banned substances lists, others such as Major League Baseball (MLB) and the National Hockey League (NHL) are much more lenient when it comes to their players use of cannabis. MLB does not conduct random substance tests for THC, which they consider to be a drug of abuse. Rather, they conduct tests if players are suspected of abusing cannabis. If players do test positive for THC, they can be admitted to a treatment program and are subject to fines instead of suspension. The NHL is arguably the most lenient when it comes to cannabis. Cannabinoids are not included on the banned substances list, but the players are still tested for it under a substance abuse program. Instead of discipline in the case of a positive test, they can be sent to a doctor to determine if they have a problem with using cannabis.

As CBD becomes increasingly popular all over the world, agencies which regulate prohibited substances are beginning to recognize the distinction between CBD and the psychoactive THC. Because there is an allowable threshold of THC in CBD products, athletes are strongly discouraged from using CBD even though it is not prohibited by the WADA. Professional athletes must find products which they are sure to contain no THC or they are at risk of violating prohibited substance policies. Some athletes as well as basketball’s BIG 3 organization are supporting the use of CBD as an alternative medicine, while others are pushing further in support of cannabis being allowed. Each professional sport sets their own prohibition and enforcement policies when it comes to cannabis, with some like the NFL being very strict and others such as the NHL being lenient. As the discussion of cannabis and CBD continues to develop across the world, so will the discussion of their use in sport.