Cracking Down on Delta-8 THC

Delta-8 THC is a direct result of companies exploiting a loophole in the 2018 Farm Bill. Ultimately, the 2018 Farm Bill distinguished hemp from marijuana and removed it from the Controlled Substances Act, meaning that any cannabinoid derived from hemp is technically considered legal. Therefore, hemp derivatives and isomers are also “legal”, as long as the final product contains less than 0.3% Delta-9 THC.

The apparent issue is that lack of specificity in the Farm Bill leaves room for the rise of Delta-8 and other synthetic cannabinoid production. Let’s be clear; this rise of man-made chemicals, mixed with a lack of regulation, leads to huge quality and safety concerns around these products. Kazmira understands this dilemma and believes regulation and clarity is needed.

What Are Synthetic Cannabinoids?

Aside from D8, a few examples you may have also been hearing about are HHC, THCO, and Delta-10 THC. THCO and Delta-10 are both created in a lab and therefore completely synthetic. HHC, similar to Delta-8, occurs naturally in hemp but at very low levels. In order to create larger amounts of these compounds, they move to synthetic practices.

For example, most Delta-8 comes from a process of synthetically altering CBD into Delta-8. D8 products are then being marketed as naturally derived, although any products on the market with D8, have been synthetically produced. One article goes on to explain, “It’s far cheaper to produce THC chemically from hemp than to extract it from marijuana”.

Manufacturers need to disclose whether they are using synthetic cannabinoids, because the synthetic production of cannabinoids without complete characterization of the finished extract is risky. A natural extract from the hemp plant contains a single enantiomer of delta-8 THC, while its synthetically produced counterpart contains a + and – enantiomers. This synthetic form may have an inherent toxicity and interact with the human body in a unique and potentially harmful way, since it does not exist in nature.

States Are Responding to Delta-8

According to an article posted by the Oracle, nearly half of US states have regulated, restricted, or banned Delta-8 already. This number is increasingly on the rise due to the legal gray area produced by the confusion and unclear federal guidelines revolving around Delta-8 THC. Colorado and Washington, the first two states to legalize recreational marijuana, made clear last year that synthetically derived cannabinoids, including Delta-8 THC, are not allowed in their legal industries. 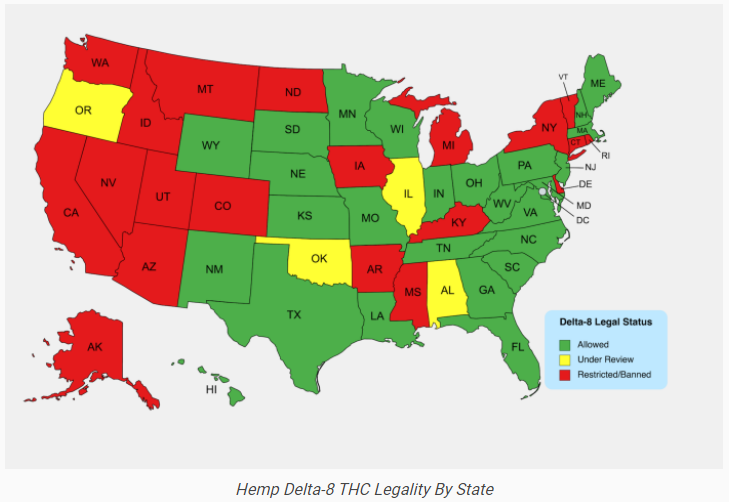 States are still in the process of regulating Delta-8 and the map above reflects the closest representation of the regulations as of April 2022. However, the map above does not reflect the most recent state to ban Delta-8 (Virginia). The green states marked as “allowed” essentially means there’s been no explicit Delta-8 THC ban in the state as of now. Just because it is “allowed”, doesn’t mean it is legal, it just means there has yet to be a ruling on it in that state.

States aren’t the only ones taking action when it comes to selling Delta 8. According to LA Cannabis News, “The once go-to industry payment processor, Shopify, is now banning the sale of all products containing more than 0.3% THC through their platform. That includes alternative cannabinoids like Delta 8 and 10, THC-O, THCP, and so on”.

Shopify emails are being sent to several distributors stating word for word, “It has come to our attention that you are using your Shopify account to sell Delta-8 tetrahydrocannabinol (THC) products containing more than 0.3% THC. Unfortunately, due to applicable laws and regulations in the United States, Shopify’s policies do not currently permit merchants to offer for sale products containing more than 0.3% THC regardless of compound type (e.g., delta-8, delta-9, delta-10)”.

This gray area that D8 falls in, allows companies to dodge regulations in place for cannabis products. This is where major concerns around quality and safety of these products come into question. The CDC has even gone as far as releasing a Health Alert Network (HAN) Health Advisory against Delta-8 THC. This advisory is in place to alert the public and healthcare departments about the increase in Delta-8 THC product’s side effects. 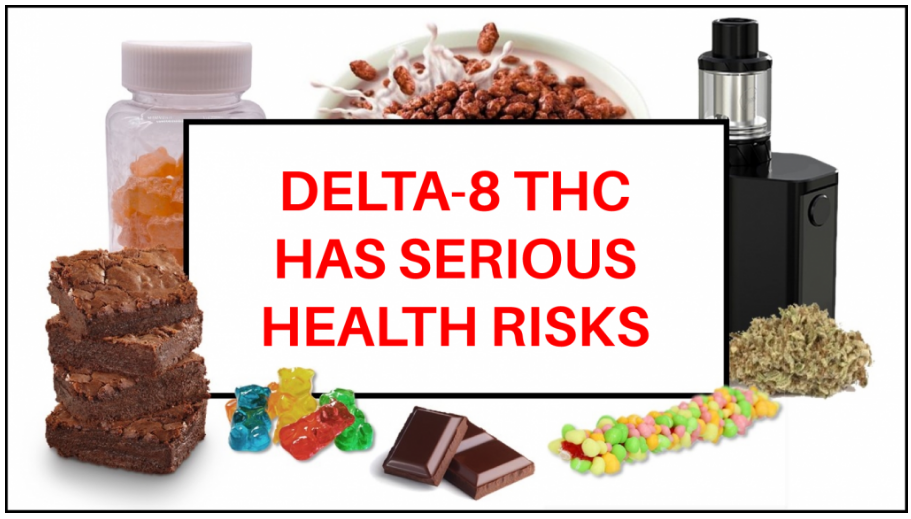 The FDA has released a consumer update about the synthetic processing of Delta-8 stating, “Delta-8 THC products often involve use of potentially harmful chemicals to create the concentrations of delta-8 THC claimed in the marketplace”. Furthermore, they inform the public about marketing misinformation declaring, “Delta-8 THC products have not been evaluated or approved by the FDA for safe use and may be marketed in ways that put the public health at risk”.

The U.S. Hemp Roundtable has even criticized the use of hemp-extracted CBD to create intoxicating products, saying it “undermines the integrity of the hemp industry and intent of the 2018 Farm Bill”. With all these safety concerns it’s clear why sanctions are cracking down on D8 and other synthetic cannabinoids.

Lack of federal regulation in the industry is the main culprit for all these potentially dangerous synthetic cannabinoids gaining popularity. At Kazmira, we never use synthetic compounds or processes to chemically modify our cannabinoids. We believe in the importance of extracting and purifying the naturally occurring compounds in industrial hemp, as well as removing impurities and THC (including its isomers) through separation science, not chemical modification.