Does CBD Convert to THC in the Body?

In 2016, a research paper (Merrick 2016) was published by the National Institutes of Health (NIH) and the National Center for Biotechnology Information (NCBI) that came to the conclusion that cannabidiol, CBD, would be converted into Delta-9-Tetrahydrocannabinol, THC, by the gastric fluids found in the stomach. Consumers and producers of CBD found this conclusion to be very disconcerting. CBD is becoming an increasingly popular cannabis alternative for the exact reason that it does not have the same psychoactive effects found in THC. Not to mention THC’s legal status in certain states.

The study in 2016 used simulated gastric fluid in their experiment to test if CBD would convert to THC. They found that in their simulated version of stomach fluid, it did in fact result in the conversion to THC.

Psychoactive products of acid-catalyzed cyclization of CBD in the presence of SGF at 37°C. CBD, cannabidiol; SGF, simulated gastric fluid.

Another research paper (Bonn-Miller 2017) mentioned that studies have shown pediatric patients who took CBD suffered from symptoms similar to that of THC, such as tiredness, but never any psychoactive symptoms. Bonn-Miller called for more human studies on this topic in order to clarify this issue and to find if the conversion actually happens in living people, not just in a simulation.

What really happens in the stomach?

Since the Merrick article, many studies have come out trying to replicate their results. A study conducted by scientists in Austria and Germany (Nahler 2017) refutes both the Merrick and Bonn-Miller articles. The main point being that in vivo studies, those with live human subjects, are different than the studies conducted in controlled environment of a medical lab. Also, the natural conditions found in the stomach are essentially impossible to recreate. The authors also make the point that THC has never been detected in vivo for patients taking high doses of CBD. 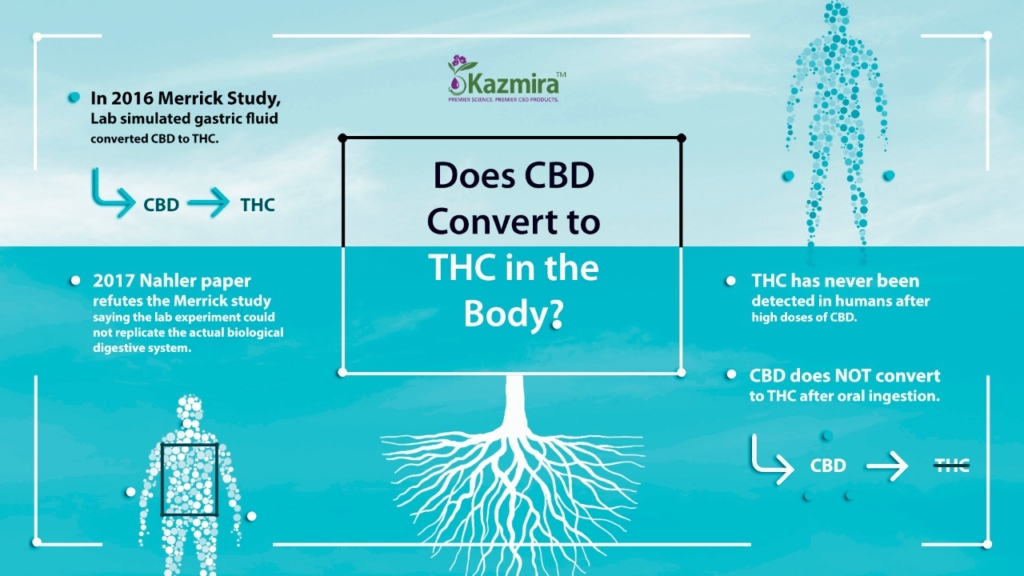 In 2017, Ethan Russo (Russo 2017) examined many different misconceptions about CBD. When mentioning the conversion to THC, he says that it is not supported by any in vivo studies. Also pointing out that there are no known enzymes in humans that can perform the transformation of CBD into THC.

Studies using animal surrogates have also been published with results that do not support the conclusions of the Merrick study (Wray 2017). Minipigs were administered CBD for five consecutive days. There was no THC or any of its metabolites detected in plasma or GI tract samples taken from the animals. A study on rats (Palazzoli 2018) also tested for THC and its metabolites in their blood after high doses of CBD were administered. Again, nothing was detected except for CBD.

Medical studies from almost 30 years ago (Consroe 1991) come to the same analysis. Using adults, the researchers tested fourteen patients with high doses of CBD over a six-week period. In this study as well, no THC was detected in blood plasma samples taken from any of the subjects. As more people begin to consume commercially produced cannabis and hemp products, the interactions between cannabinoids in the body are of great interest to the scientific and consumer communities alike. Pharmacokinetic research (Huestis 2007) on how THC, CBD, and other cannabinoids interact and affect the body claims that CBD may in fact lessen the side effects of THC when taken simultaneously. It also concludes that neither oral consumption or smoking of CBD can convert the compound to THC.

There is no evidence yet that CBD can change into THC in humans or animals.

Research in human and animal subjects has repeatedly contradicted the claim that CBD can or will convert to THC under acidic stomach conditions. Although it can be done in a lab setting, there are clearly key differences with a living biological system. In humans, there is no evidence that THC can be created in the stomach, even after taking very high doses of CBD. Like most areas in cannabis research, there is a lack of large-scale human studies to reference. In order to clarify this issue more fully, larger human studies using live subjects should be conducted.