THCV, tetrahydrocannabivarin, is one over 80 cannabinoids that have been identified in the Cannabis sativa species which include CBD, THC, and many other biologically active molecules. Although THCV is usually found in very low concentrations when compared with CBD or THC, there are some hemp and cannabis varieties that contain high concentrations of THCV and it is quickly gaining attention for its unique interactions with other cannabinoids. One of the biggest questions surrounding THCV is whether or not it has the same psychoactive effects as the well-known THC.
There are almost no human studies that have looked into whether this is true or not. This makes drawing conclusions difficult, but here is a summary of what scientists have been able to discover about THCV.

Does THCV have a psychoactive effect?

THCV and THC (tetrahydrocannabivarin and tetrahydrocannabinol) are similar compounds.  One can see the similarities when you look at the molecular structure of the two compounds, which only differ from one another by the longer carbon chain found on THC, but this small difference yields big changes in how the compound interacts with cell receptors both in effect and activity. 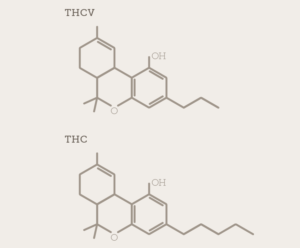 In 1970, researchers at the University of Oxford were among the first to identify THCV in a cannabis extract. In the same paper, they reported that THCV was almost five times less active than THC in an experiment done on mice.
In 1974, a study on the relationship between structure and activity in cannabinoids reported that they gave six people 7 mg intravenous doses of THCV to determine its similarity to THC. One of the six reported no effect, while the other five had mild effects similar to THC. The study concluded that the potency was about 25% that of THC. This study was completed without the use of a control group and the sample size is small, but this is one of the small handful of studies looking into the effects of THCV in humans.
A paper published in the British Journal of Pharmacology in 2005 looked into how THCV interacts with Cannabinoid Receptors, CB1, and CB2, in brain tissue and hamster ovary cells. CB1 and CB2 Receptors are in cell membranes found throughout the body belonging to the endocannabinoid system, see our previous blog entry to learn more. THC is known for attaching to CB1 receptors, which have a high concentration in the brain and producing psychoactive effects. The study found that THCV can actually act as a CB1 and CB2 receptor antagonist, blocking THC and other cannabinoids from binding by competing for the receptor. WIthout the ability to bind to cell receptors, THC loses its ability to have an effect on body chemistry.
A study published in 2007 further investigated these findings and determined that while low doses of THCV do in fact antagonize CB1 and CB2 receptors and block some of the psychoactive effects of THC. This means at high doses, THCV excited the receptor in the same way THC does, producing psychoactive effects in mice. However, since this study was completed on and with mice with a synthetic analog of THCV, not naturally extracted THCV, it is not easy to extrapolate the findings to humans. There are no recent human studies on the psychoactive effects of THCV.
One recent study looking into the antagonistic effects of THCV on THC in human subjects was published in 2016. Ten male cannabis users were given 10 mg THCV orally for five days or a placebo. On the fifth day, they all were given 1 mg of THC intravenously, and the level of psychoactivity was compared between the THCV and placebo groups. There wasn’t a noticeable difference between the THCV and placebo, indicating that a 10 mg oral dose is not enough to produce any psychoactivity. Their results included a significant lessening in delayed verbal recall, an increase in memory intrusions, and reports of feeling less euphoric in the THCV group.

THCV does have a psychoactive effect on humans, but not in the same way as THC. Studies have shown that at large doses THCV are about 4-5 times less potent than THC, but still produces similar effects. Low doses of THCV however, produce the opposite effect, blocking the action of THC at CB1 receptors and lessening the psychoactivity. Cannabis varieties that have large concentrations of THCV are becoming more popular due to these differing effects. Detailed research on the psychoactivity of THCV in humans has never been conducted and is clearly needed. Until more studies have been completed, it is difficult to determine what exactly the psychoactive effects unique to THCV are and how they interact with THC in the human body.