The expectations for this Task Force are the following:

During the first Task Force meeting it was apparent there needed to be agreed upon definitions for specific terms in the industry, relating to intoxicating cannabinoids in hemp products. The second meeting was dedicated to getting a consensus on these terms. Leading up to this meeting, a pre-work document was sent out with initial suggested terms and guidance for TF members to then make edits and submit proposals for these definitions. The definitions were discussed during this second meeting and options for each term were proposed. 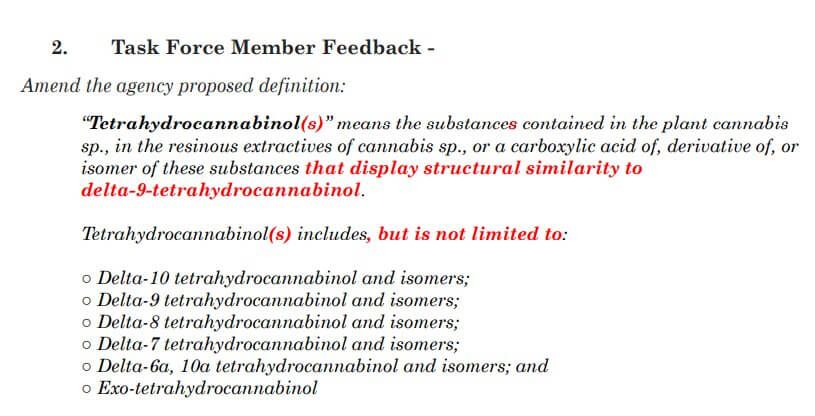 The term Tetrahydrocannabinol (THC) was the first term to be discussed by the TF, and the red language, “includes, but is not limited to”, was a suggestion by Kazmira to be added into the original statute definition. Opposing members stated that this language was broad and made the definition too vague and unclear. We believe this language is encompassing enough but not too specific, so as to not allow for other intoxicating THC isomers to emerge from this definition. 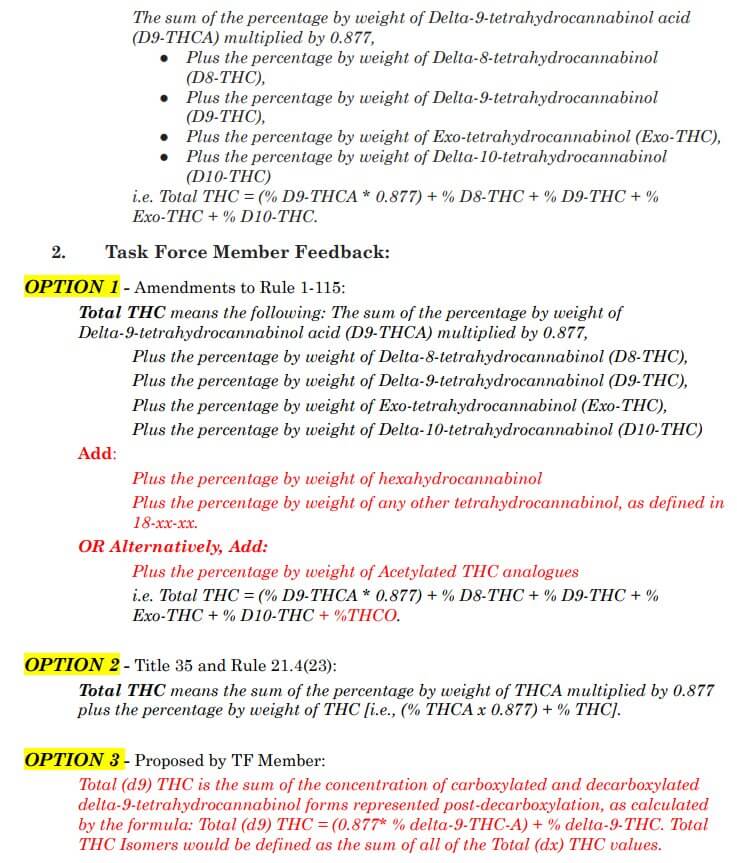 Total THC was the next term up for debate, and some comments questioned whether it was necessary to define total THC, or if we could just define the term total intoxicants. The general consensus was that option 2 is the best choice for the consumer, especially if we decide to go with the “including, but not limited to” language for the THC definition. Option 1 was refuted by the majority of stakeholders because hexahydrocannabinol (HHC) is not actually a THC and was determined not to be included. 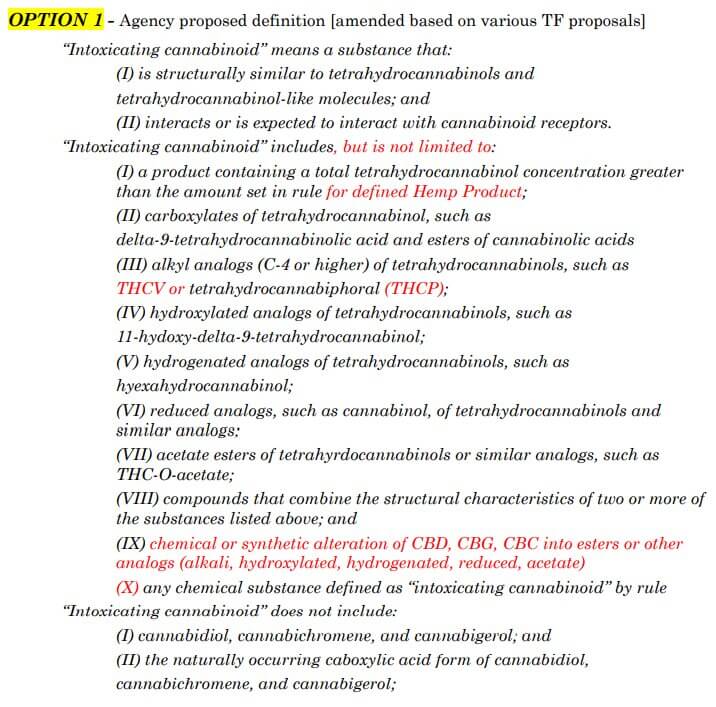 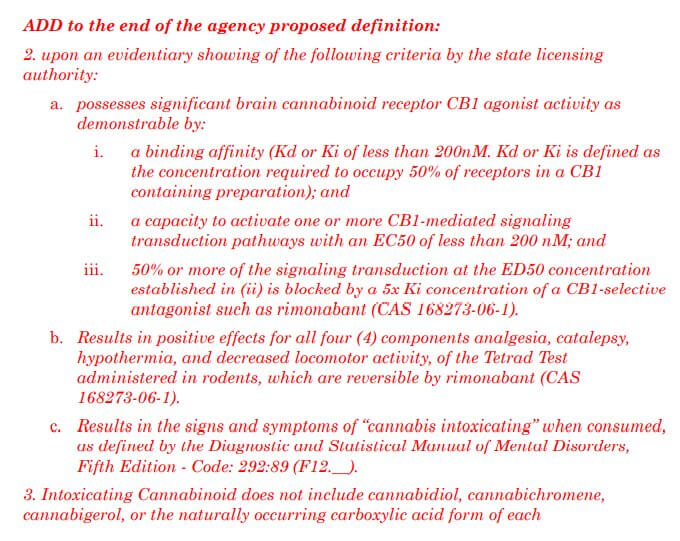 Multiple options were proposed on how to define the term Intoxicating Cannabinoids. Specific language was taken from Kazmira’s proposal, (IX), and included in option 1. One thing most members could agree upon with this definition is that it needed to include the specific language, “in a finished product”, to keep consumer safety at the forefront. There were several members who really liked option 3 as an add on to option 1, however, questions arose about the testing requirements. Specifically, who would be doing this testing, the states or the industry, and would there be accredited facilities with standardized testing procedures throughout the country? The complexities and difficulties with standardized testing in the industry leads us to believe that option 1 is a good enough definition to move forward with this Task Force. 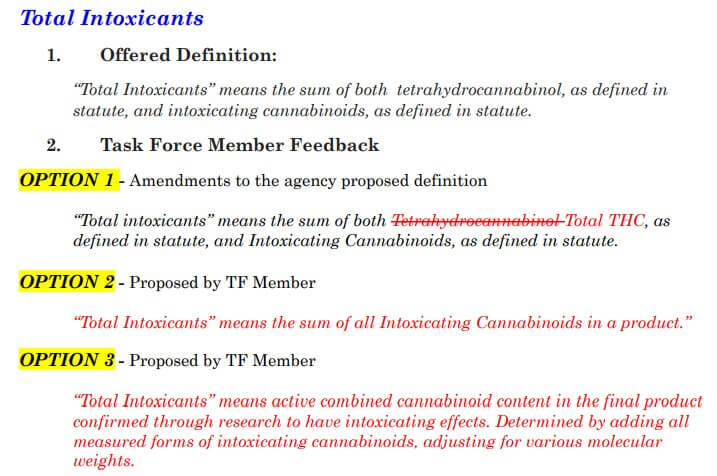 The term Total Intoxicants caused confusion between members because some parties believed that intoxicants are based on the dose, not the molecule, so serving size or limits would be needed for this definition. The use of the term “potentially” intoxicating was suggested as an alternative to intoxicating. One member made a good point about how alcohol is an intoxicant, yet is still non intoxicating at certain levels.

Kazmira believes that a finished product scale could be an option to help settle this intoxication debate. For example, THC-Free product= <0.01% THC, Broad-spectrum product= 0.01%-0.05% THC, Full-spectrum product= 0.05%-0.1% THC, and an Intoxicating product= 0.1%+ THC. If companies want to sell a hemp product with more than 0.1% THC and believe it to be non-intoxicating, they will need to prove this to the CDPHE through studies, research, etc. 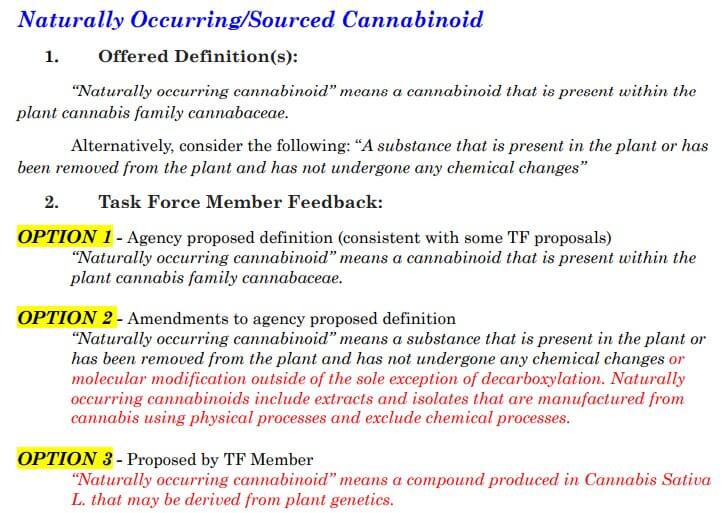 Naturally Occurring Cannabinoid may have been the most contentious term that was discussed during this meeting. Kazmira proposed the red language in option 2 and believes that due to the focus on public safety, the route of how something is manufactured should be the aim here, lending to option 2 being the most viable. One opposing position suggested that the compounds don’t need to be naturally extracted from the plant, but can be found to occur naturally, no matter at what levels. A tiered system was suggested to include the terms naturally occurring (extracted from the plant), naturally occurring/chemically modified (D8 from CBD), and naturally occurring/synthetically derived (mimicking what we find in nature but not naturally in the plant). The issue with the proposed tiered terms above is that it can lead to mass confusion for the consumer, which in turn can lead to major safety concerns.

When opening the floor to the public for comment, many members of the public had a similar consensus on what they had to say. The importance of differentiating between natural vs. synthetic cannabinoids was a hot topic, stating, natural cannabis compounds are non-toxic while their isomers are toxic. One member of the public followed-up by suggesting considering grouping anything that’s been modified from a plant extract into the same category (e.g.; any synthetics are synthetic). Another member of the public said we should rely on the CDPHE and FDA standards and/or previous definitions, and solely focus on what’s intoxicating in finished products. This was followed-up with someone saying that we don’t have to create definitions for these in order to create regulations, and that we should focus on how to identify the intoxicating compounds and products, and what regulations would look like for those.

Industry Thoughts From Outside the Task Force

We had a conversation with Jerry Griffin, Vice President of Baymedica, about the phrase ‘from hemp’. His post on LinkedIn suggests how when sometimes marketers say, ‘from hemp’, they are essentially lying and hurting the market/industry for synthesized cannabinoids. “If you manufacture D8 THC, CBN, THCV ‘from hemp’ the truth is it’s chemically synthesized, not extracted from a hemp plant. You may start with some other cannabinoid that came from a plant, but you are using the same chemistry we use at BayMedica to convert that starting material into your target cannabinoid. So why lie?” Overuse of this ‘from hemp’ phrase undermines the integrity of everyone working in this industry and in turn could increase the likelihood that the government will want to overregulate.

Jerry states, “we’re making the exact same molecule that the plant makes but we’re not using the plant to do it. We characterize that as bioidentical. Is it synthetic? Absolutely! Bioidentical infers it’s not obviously from a natural source, but it also infers that it’s the same as what comes from the plant. On the other hand, the ‘from hemp’ label infers it’s extracted from hemp, or it’s a molecule the plant makes, which is disingenuous.” He proceeds by saying, “In an industry that really needs to earn some trust from the public, transparency is key and the only way to root out bad actors is with transparency and trust. In a lot of cases, ‘from hemp’ does the opposite and serves to erode that trust and damages the industry as a whole.”

The job of this Task Force is to protect the public in Colorado from unregulated THC and other unregulated intoxicating cannabinoids. The Task Force has set up two interim meetings to discuss the final draft report outline and delve deeper into synthetic compounds and their definition. Stay tuned, we’ll keep you up to date as discussions progress.