Another example, in the long list of uses for industrial hemp, is its natural ability to filter toxic chemicals out of polluted soil. The cannabis plant readily absorbs many man made pollutants and heavy metals through its roots and stores them, making it possible to then remove the hemp and the hazardous compounds with it. These conclusions have been documented in a number of research projects as well as in real world application.

After the Chernobyl Nuclear Disaster in Ukraine 1986, hemp was planted in an attempt to help clean up the soil around the site (Citterio 2003). This process is called Phytoremediation. ‘Phyto’ meaning plants, and ‘remediation’ meaning to heal, which in this case is irradiated soil.

Application of this technique is not only useful after a nuclear disaster, but in many real world examples of polluted soils. For example, agricultural land that has been contaminated by excessive amounts of fertilizers and pesticides or soil near a landfill where harmful contaminants have leached into the surrounding soil. Phosphate fertilizers are one cause of the build up of Cadmium (Cd), a very toxic metal, in agricultural land (Salmanzadeh 2017). Other sources of Cd are exhaust from cars and waste from industrial processes. A study done in China (2011) concluded that many hemp varieties have a high tolerance to Cd stress and are therefore good candidates for use in phytoremediation.

Hemp is not the first example of a plant that was used in agricultural or industrial remediation. Many plants are known to accumulate heavy metals and pollutants. Most are small shrubs with specific growing conditions and shallow roots. To be effective in soil remediation, more than just the very top layer of dirt needs to be cleaned of pollutants. Industrial hemp is a relatively tall plant with roots that are about 1.5-3 ft. in length. This makes it attractive because hemp is able to reach deep into the soil and therefore be much more effective at removing widespread contamination (Citterio 2003).

When used to remove heavy metals for example, hemp absorbs metals such as lead or nickel, which are both used heavily in industrial applications, and stores it throughout the plant tissues. A study done in 2002 found that the highest concentrations of heavy metals accumulated were found in the leaves, although it was distributed in every part of the plant. 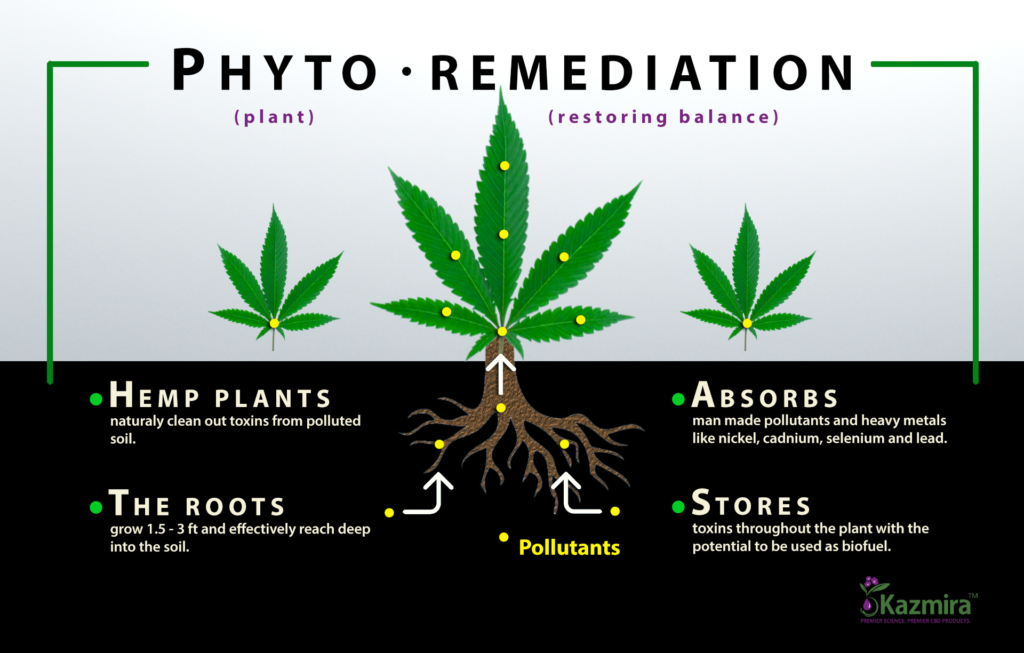 Now the Soil is clean, but what about the Hemp?

Although it cannot be harvested for food, clothing, or medicinal products due to its extraction of toxic compounds, there are other options for its use in, for example, biofuels. Hemp can be grown in dense fields and on low productivity soil. Also, it can grow up to 16 ft. in height and consequently produces a lot of biomass – organic plant material. This can then be used as a starting material for biofuel production.

Contaminated hemp can also be burned to heat boilers for electricity production or distilled into ethanol. A study in Pakistan (2013) analyzed hemp’s potential as a sustainable energy source amid an energy crisis and concluded that indeed hemp is a viable option for large scale energy production.

The ability of hemp to extract heavy metals and pollutants from soils offers another useful application of the plant and once remediation is complete the plant material can still be used to create energy. Beyond cleaning the soil, research is being done on using the hemp fibers to create absorption material that could filter out heavy metals from contaminated water (Morin-Crini 2018). These properties of hemp have been known for quite some time, however, they are now being recognized by the wider public, and offer solutions for a cleaner, sustainable future.