A PSA For CBD Consumers

There is a high demand for extracts containing phytocannabinoids derived from Industrial Hemp. However, there are two major molecular limitations, related to the biology of the plant itself, that make these extracts difficult to produce commercially.

The second is the presence of THC. Due to THC’s status as a schedule 1 substance, manufacturers must figure out how to produce CBD extracts with compliant levels of THC. This challenge has also resulted in manufacturers turning to alternative methods, whether it be new technology, simple dilution, or chemical modification to produce extracts below the THC threshold.

While manufacturers scramble to produce these extracts legally and at lower costs, consumers are left in the dark about what is going on behind the scenes. Although the majority of consumers assume they are purchasing products which contain cannabinoids that occur naturally in hemp, it is very common for many of these products to contain cannabinoids that have been artificially produced or chemically modified from industrial hemp derivatives after extraction.

Industrial Hemp provides a biomass that contains an average of 8% cannabinoids by dry weight, the majority of which is CBD. Another important cannabinoid, often with relatively high concentrations, is THC, which by law must be below 0.3% by weight.

In addition to CBD and THC, there are also minor cannabinoids, which are typically present in relatively low concentrations (< 1%). Of the ones that have been identified, these minor cannabinoids include CBG, CBN, and CBC.

Many of these cannabinoids are related to one another in their natural synthesis process. For example, when THC is exposed to light and heat, it converts to CBN. This is a process that occurs naturally over time in the plant in the hemp field as the THC begins to degrade. However, some manufacturers have deliberately leveraged this natural process in order to subvert federal THC regulations.

Keeping THC within federal limits is a major challenge in the CBD industry, as manufacturers do not have the technology or know-how to remove THC. Instead of purification or separation science, most extractors have turned to ‘cooking’ their extracts in order to chemically convert THC.

Here’s how it works: By introducing the hemp extract to heat and oxygen, the THC will undergo a chemical conversion. ‘Cooking’ hemp extracts is a method used in the industry to chemically modify the non-compliant THC found in the CBD oil and turn it into the cannabinoid derivative CBN.

This process should not be described as extraction or purification, rather, it is more accurately described as a chemical reaction. Not only is the THC subject to this process, but the entire extract is ‘cooked’, meaning this reaction is likely affecting other cannabinoids and molecules in the extract as well. The reason this is a problem is because manufacturers are not disclosing these processes to consumers.

Regulatory bodies are beginning to catch onto this dangerous trend. In the UK, CBN is still considered a Schedule 1 Substance. CBN is also considered to be an artifact of THC oxidation, meaning that a high CBN concentration on a Certificate of Analysis is often the sign of an extract that used to have a high THC concentration, and was cooked in order to convert it to CBN.

There are other methods, arguably even more risky, that have been described for converting THC into CBN. In addition to heat oxidation, UV light & Iodine Treatment have both been suggested as methods. Iodine treatment not only affects THC molecules but also reacts with other cannabinoids like CBD, which could result in novel and untested compounds in the finished product.

Cannabinoids that have been chemically modified after extraction should not be described as ‘hemp derived’. Although the precursor molecules may have been derived from hemp, the final product was produced through an alternative chemical process, and consumers deserve to be aware of that.

The Dangers of Synthetic Cannabinoids 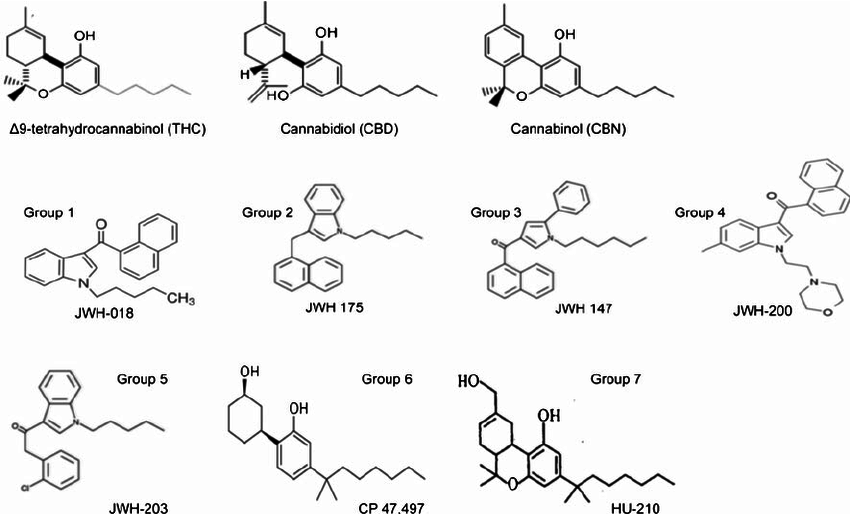 Synthetic production of cannabinoids without complete characterization of the finished extract is also risky. A natural extract from the hemp plant contains a single enantiomer of THC (- delta 9 THC), while a synthetically produced extract contains both the + and – enantiomers. Since the synthetic form does not exist in nature, it may interact with the human body in a unique and potentially harmful way. For this reason, manufacturers should disclose whether or not they are using synthetic cannabinoids.

The reason synthetic compounds are potentially dangerous is because “The human body is not equipped with the tools needed to catabolize synthetic cannabinoids.” Novel cannabinoid molecules created through synthesis are chemically very different from their naturally derived counterparts. This means that the human body does not have the appropriate enzymes to break them down, which could be very dangerous.

Kazmira is Keeping it Natural

At Kazmira, we never use synthetic compounds or processes to chemically modify our cannabinoids. We believe in the importance of extracting and purifying the naturally occurring compounds in industrial hemp, as well as removing impurities and THC through separation science, not chemical modification.

Our process is conducted without extreme temperature or pressure. Extracting and purifying our oils at ambient temperature ensures minimal degradation and damage to the cannabinoids and terpenes. We employ our TruSpeKtrum™ technology, a patent protected purification process which “plucks” out THC from the extract without any chemical modification.

Consider this a public service announcement for the consumers of CBD. After all, every consumer deserves to know what they are putting in their body. As industry leaders, it is our duty to demystify CBD for consumers.