Terpenes are hydrocarbon molecules which are found in all plants. They have a 5 carbon base, many of which have 10, 15, or more carbons, making them a very diverse and large class of biologically active molecules. The term comes from turpentine, which is the resin found in pine trees and is responsible for the classic pine scent. The terpenes present in the resin cause the strong smell, and also serve other functions such as attracting pollinators or deterring herbivores. Plants with strong scents like citrus, rosemary, eucalyptus, and lavender have high levels of distinct terpenes which give them their fragrance, flavor, and potentially even medicinal properties. Essential oils are basically the extractions of terpenes from plants to be used in food as well as aromatherapy (Breitmaier 2006).

Cannabis has many biologically active phytochemicals including terpenes and cannabinoids. There are over 100 terpenes identified in cannabis alone. The relative abundance of each terpene varies from strain to strain, and even plant to plant. They are created in the trichomes of cannabis, which are most concentrated on the flowers. However, terpenes are produced in smaller quantities throughout the plant (Andre 2016).

Terpenes are the cause of the wide variety of scents produced by cannabis flowers. High levels of the terpene limonene might cause the buds to smell of citrus, while myrcene gives it a more musky or earthy smell. Researchers are working on using the terpene profiles of cannabis plants to distinguish between hemp, indica, and sativa groups. The terpenes present, and their concentrations, act as markers to distinguish the different varieties (Hazekamp 2016).

Recent research has indicated terpenes may have the ability to cross the blood-brain barrier, and interact with nervous system receptors in the brain. α-Pinene is the most common terpene in nature; found in pine trees, rosemary, and cannabis where it often serves as an insect repellant. A paper published in the British Journal of Pharmacology in 2011 looked into potential anti-inflammatory effects of pinene and suggested that it may work against the negative effects of THC on memory. 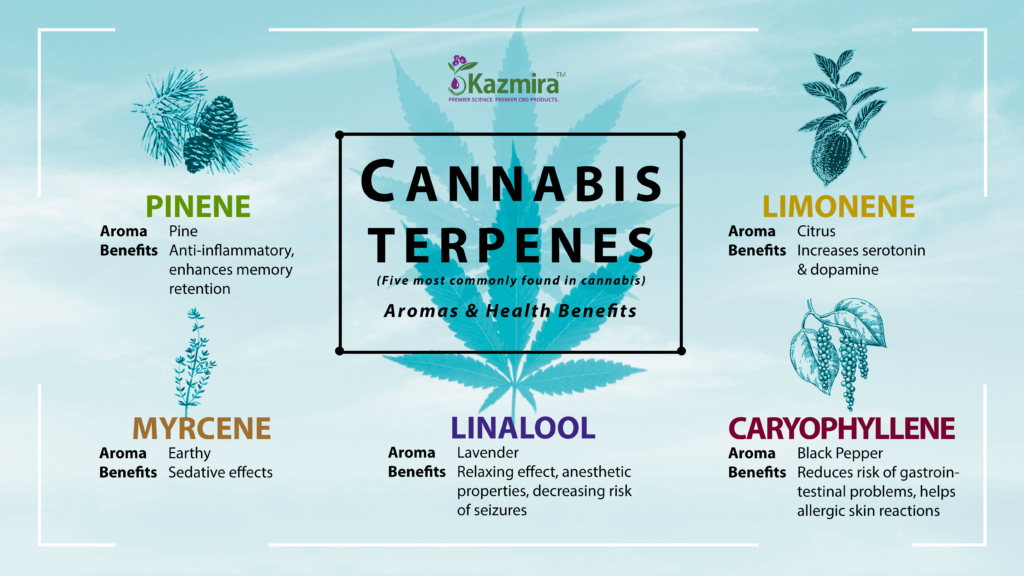 D-Limonene is the second most common terpene and can be found in all plants that have a citrus scent. It is also very easy for the body to metabolize and is completely non-toxic (Russo 2011). The paper mentioned above also looks into interactions between limonene and serotonin in the brain.

D-Linalool is another terpene commonly present in cannabis, and has been studied in detail for its pharmacological effects. Studies have shown sedative effects in mice and anesthetic properties used to treat cuts and burns (Russo 2011). There are high amounts of linalool in lavender, which has been used for its medicinal properties for thousands of years in traditional medicine. Lavender essential oil is also very popular in aromatherapy.

β-Caryophyllene is often the most common terpene found in cannabis extracts that have been treated with heat. It’s also found in black pepper and has been investigated for potential anti-inflammatory effects. Plants may use it to attract insect predators as well as ward off insects that could be harmful to the plant (Russo 2011).

Why do Plants Produce Terpenes?

With the help of cannabinoids that are also produced in the trichomes of cannabis, terpenes play an ecological role in the survival of the plant. Cannabis does not suffer from many herbivorous insects due to its high concentrations of these molecules in the thick resin it produces. The resin production is higher in times of stress or when the plant is damaged in order to ward off predators and protect itself. Terpenes and cannabinoids work together to defend against bacteria and fungi threatening the plant. They also are useful in protecting the plant from UV radiation, acting as a chemical protectant similar to melanin in humans (Pate 1994).

Terpenes are responsible for the variety of scents and flavors in cannabis, whereas cannabinoids contribute to the main nutraceutical and psychoactive properties. However, since terpenes have been shown to be biologically active in animals, both cannabinoids and terpenes may contribute simultaneously to the effects cannabis can have on the body.

This synergy between terpenes and cannabinoids is being heavily researched to figure out how these molecules interact and affect the body. However, terpenes are without a doubt the reason for the incredible variety of scent and flavor that cannabis and hemp has to offer.